Garnets – a set of related minerals forming a group with gems in almost every color – are one of the oldest known gemstones, loved and praised for centuries.

Garnets are extremely unique gemstones. Although red garnets are one of the most common and prevalent gems, there’re plenty of other garnet colors: greens, oranges, pinkish oranges, deeply saturated purplish reds, and even some blues!

As we’ve already mentioned, red garnet is one of the most common gems, found on every continent. However, not all garnets are as abundant as the red ones. For example, tsavorite – a green garnet – is much rarer, since it requires unusual chemical conditions to form.

Moreover, garnets can even exhibit the color-change phenomenon similar to the one in alexandrites.

The word “garnet” comes from the Latin «granatus» meaning “seedlike” in reference to a pomegranate.

Thousands of years ago, red garnet necklaces adorned the necks of Egypt’s pharaohs, and were entombed with their mummified corpses as prized possessions for the afterlife.

Then, in ancient Rome, rings with carved garnets were used to stamp the wax that secured important documents.

Centuries later, in Roman scholar Pliny’s time (23 to 79 AD), red garnets were among the most widely traded gems. In the Middle Ages, red garnet was favored by clergy and nobility. In the 18th and 19th centuries garnets were frequently used for Victorian epoch jewelry.

Nowadays, garnets are still a popular and inspiring choice for gem lovers and jewelry designers!

People believe that garnets have the power to shield their wearers from any harm. For example, Saxon and Celtic kings favored garnet inlaid jewelry. Native American healers believed that garnets had protective powers against injuries and poisonings. Moreover, according to Judeo-Christian tradition, King Solomon wore garnets for a battle. During the Crusades, Christian and Muslim warriors also wore garnets.

Garnets exist in all colors – you may choose one (or several) that you like. Just like with all the other gems, the richer and purer the color, the higher its cost and the more valuable the gem itself.

Garnet clarity depends on its type. For example, red garnets (almandine, pyrope, and rhodolite) typically do not have eye-visible inclusions. Some orange garnets (like spessartine and hessonite) often have eye-visible inclusions. Demantoids typically have a horsetail inclusion that looks like an exploded firework. Such a horsetail inclusion is regarded as the most reliable evidence of demantoid’s Russian origin. The presence of such a beautiful horsetail indicates the rarity and uniqueness of the gemstone.

Many garnets (especially the red ones) are cut into standard shapes and sizes. Expensive garnets (like tsavorite) are cut into shapes that allow more of the weight to be retained from the rough stone. Demantoids are often cut in ways that allow the best possible display of their unique beauty.

Garnets are found in all sizes and weights. Some garnets, like demantoid and tsavorite, are commonly found in smaller sizes, so their value goes up with the size. Other garnets, like almandine, are far more common in larger sizes so there’s no dramatic rise in value as size increases.

“Talking about Garnets, it is worth paying special attention to such varieties as Demantoid and Tsavorite. There are very rare gems of incredible green shades with a price that often reaches several tens of thousands per carat.

Just as an example: in 2021, at the Hong Kong auction, the Demantoid Garnet and Diamond Ring and Earrings were sold for $48,000. As you see, these gems are definitely worth looking at”. 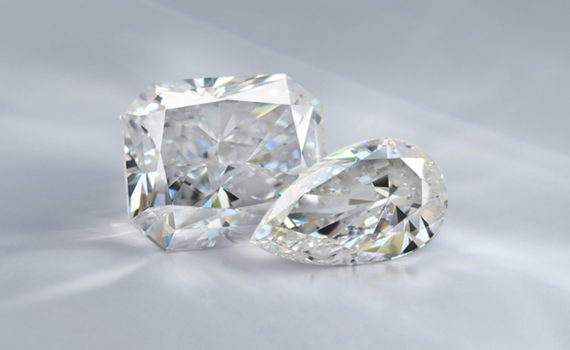 Imperial Topaz 4.75 ct & Imperial Topaz 6.59 ct “I have topazes yellow as are the eyes of tigers, and topazes that are pink as...

B for Brown Diamond